People lived in Hartfield Parish about 6000 years ago. Stone and Flint tools have been found throughout the area from Kings Standing in the south to Holtye in the North. The flint tools, together with the knapped shards, indicate trade with either the North Downs or the South Downs as there is no flint in our area.

These early residents learned how to produce iron which we know from the bloomeries of the time. The Romans arrived here in the first century A.D. and quickly latched on to the abundance of iron ore and set to producing it for themselves. At this time the Romans built the London to Lewes road which passes the length of the parish. It is of interest to note that sections of the road have iron slag in their base to help with drainage. This suggests that the early folk had been very industrious. Another Roman road runs from the Wych Cross area to Upper Hartfield. It passes close to a Roman villa that had hot and cold running water and which itself was built inside a very ancient fortified enclosure. These roads must meet up but it is not known where

The Saxons have left almost nothing on our patch which is disappointing considering the name of our county is said to derive from the land of the ‘South Saxons’. However, evidence of their activity is clear from the formation of The Hundred of Hartfield. Hundreds, established well before the Norman Conquest, were semi-autonomous areas with well-defined boundaries sufficient, it is thought, to support one hundred families. The Hundred of Hartfield composed of parts of the parishes of Hartfield, Withyham, Rotherfield and Buxted. It did not concern itself with Parish Boundaries which in any case probably did not exist at the time. It took its name from Hartfield, surely as being the most important settlement within it

After the Norman Conquest in 1066 William soon became King of England and confiscated virtually all property and land from the owners. In the Domesday Book of 1086 the area of Hartfield (Hertevel) we are told was given to William’s half brother Robert de Montain, who, after William himself, was the second largest landowner in England. The book tells us, inter alia, that the late King Harold had owned properties here and that there was a Mill which in 1086 was taxed to the tune of 4 shillings and 350 eels. The site of this Mill is still to be seen today at Bolebroke Mill. 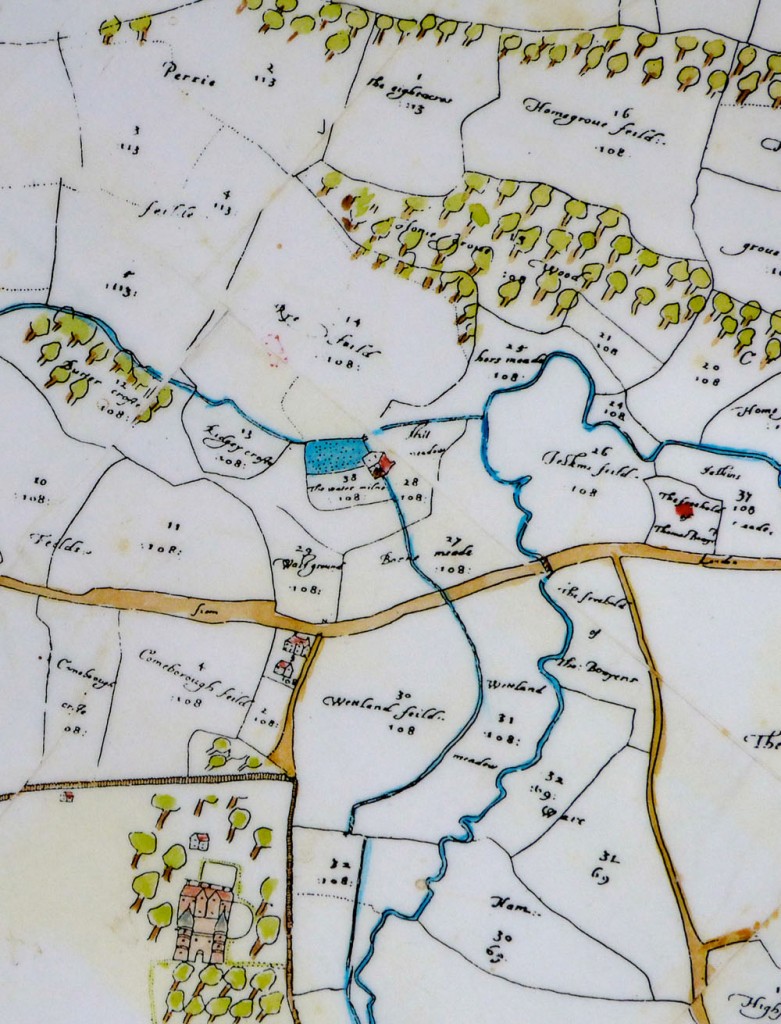 This is a piece of a map of the Manor of Buckhurst believed to be dated 1597 and you can clearly see the Water Mill and the Mill Pond. The brown road is what is now known as Edenbridge Road and if you look at the top left hand corner you can see the word ‘Perrie’ which must be the origin of Perryhill today. The large building near the left hand bottom corner is Bolebroke or Bolebrook Castle. (See pictures under Historic Buildings.)

Although in Mediaeval times Hartfield was well established as a village there is evidence of 13th century settlements in outlying areas such as Colemans Hatch and Colestock.

The so-called Castle Mound on the edge of the village on which probably stood a fortified building is thought to date from the 13th century. Originally it was much higher and had a deep ditch around it.

St Mary’s Church has fabric from the 13th century and is the oldest in the Parish. Possibly the oldest house is Popes Cottage in Church Street which is early 14th century.

There are many houses in the High Street of great antiquity – 15th century – and many more dotted about the Parish.

By the Mediaeval Age iron working had developed from a cottage industry to well organised heavy industry. An important iron works was at the very spot where the present Pooh Sticks Bridge is. More important was the blast furnace at Newbridge constructed in 1496 and the first of its kind in the country. The furnace was kept to the required heat by a pair of giant sized bellows which were powered by a waterwheel. The tricky part of this procedure was to keep the furnace hot because if the temperature fell below a certain point the molten ore would solidify which meant that the whole editors would have to be taken down. Consequently the furnace burned night and day which must have kept the charcoal burners in the neighbourhood very busy. Iron making in Sussex had ceased by 1813.

Several stories were run on one page of historic information under an eye-catching headline! 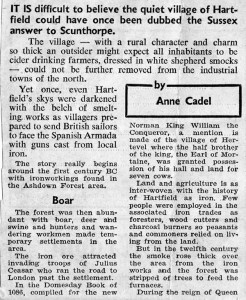