CHURCHES AND OTHER RELIGIOUS BUILDINGS – by Mike Parcell.

St Mary the Virgin Church has elements of the 13th century but as Hartfield is mentioned in the Domesday Book of 1086 it is most likely that there was a church at that time. The first Rector for whom we have a record is Walter who was instituted in 1263.

For a brief time the Patron was Queen Elizabeth 1 who in 1566 gave the patronage to the Sackville family and various branches of this family have held it ever since. The present Patron is Earl De la Warr.

In the 14th century the south aisle was added, at the same time the tower was built. The shingled tower was added in the 15th century. In the 16th and 17th centuries the rood screen and chancel arch were removed , the chantry chapel in the south aisle opened up by the building of a large nave arch and the chancel was reduced in size. In the 19th century the stained glass window on the east wall replaced an old clear glass window.

In 1969 the then Reverend, Peter Douglas Stuart Blake who had been the Incumbent since 1976 wrote a detailed History of the Parish and an Architectural Guide to the Church of St Mary the Virgin which I believe is due to be re-printed but to give it a larger audience it has been scanned and will be added to this website shortly as an interesting and important historical document. 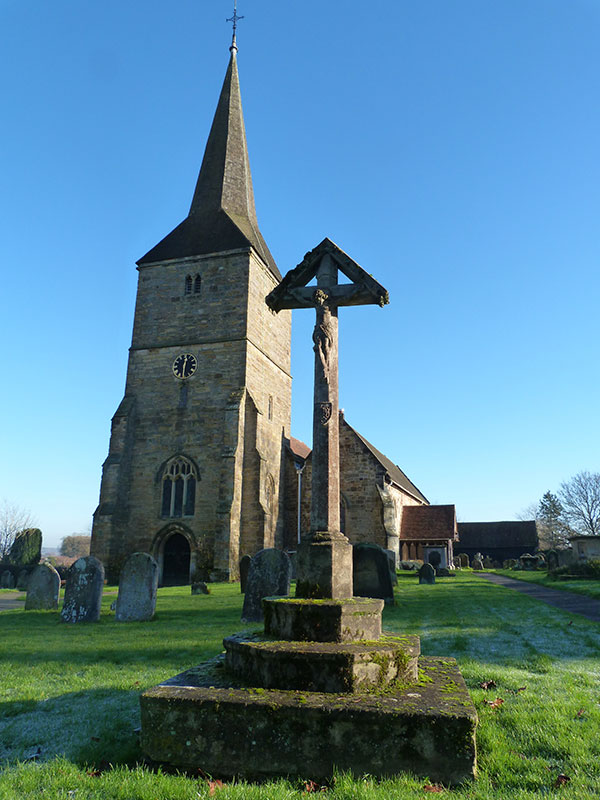 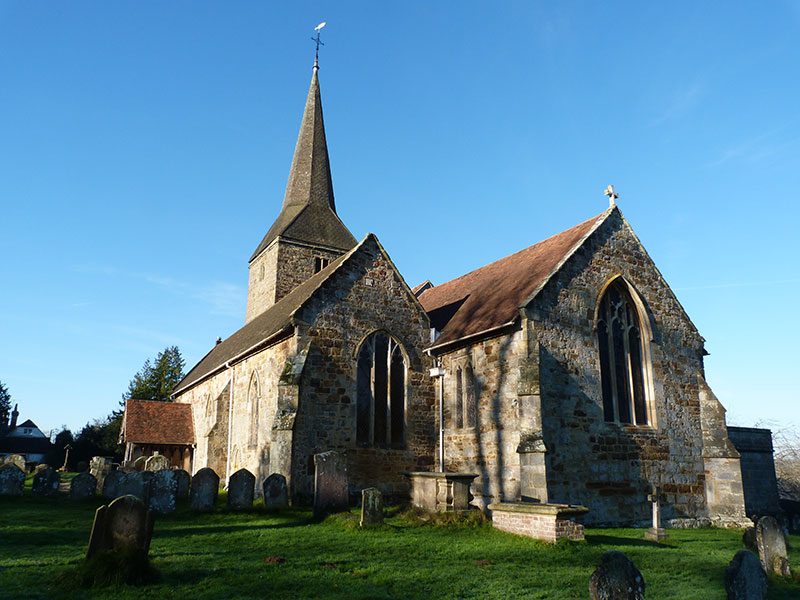 In 1885 Mr John McAndrew, a shipping magnate, arrived at Colemans Hatch where he built the magnificent ‘Holly Hill’. He worshipped at Hartfield where he was a Churchwarden and provided very generous financial support. In the early years of the 20th century he fell out with the Rector in the matter of the form of Divine Worship. There was a schism resulting in Mr McAndrew building his own church at Colemans Hatch . Holy Trinity was consecrated in 1913 and the ecclesiastical Parish of Colemans Hatch was formed. He is buried in the churchyard in a very modest grave amongst those he loved and those who loved him. 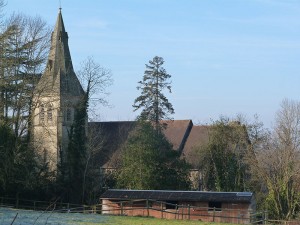 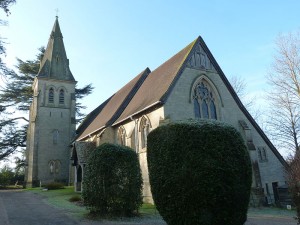 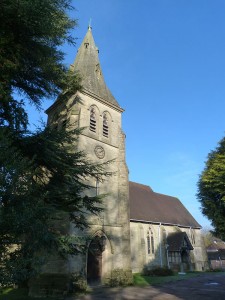 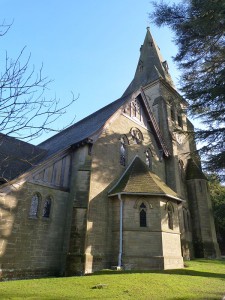 The following picture of Holy Trinity was in the folder containing the reminiscences of Alec Butler which you can read by clicking on ‘Reminiscences’ but it was such a clear picture of the church before the growth of trees that it has been included here. 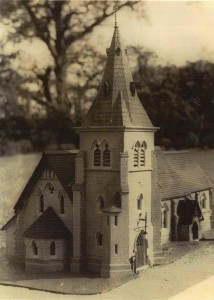 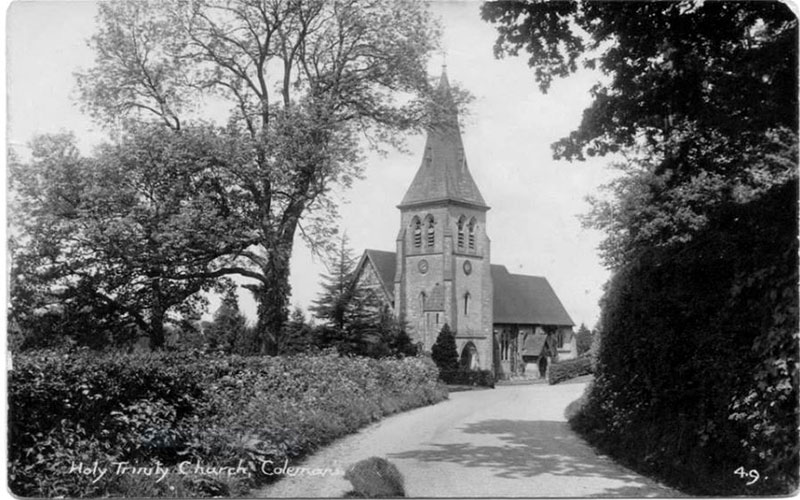 Once upon a time you could see Holy Trinity this clearly from the road.

In 1836 a small church was built on Holtye Common in the northern part of the Parish. Hitherto attending church at either Hartfield or Cowden excluded all those without horse-drawn transport – i.e. nearly everybody. The new church was called St Peters, Holtye.

In 1892 it was largely demolished and replaced by a larger building with local wealthy banker, Oswald Augustus Smith footing the bill.

Holtye was originally within the ecclesiastical Parish of Hartfield but in 1880 O.A.Smith funded the building of St Stephens Church just along the road at Hammerwood. Thus a new Parish of Hammerwood was created.

Early in the 21st century the cost of the upkeep of St Peters, together with the lack of congregational support, proved an unsurmountable problem. In 2008 it was declared redundant and services are no longer held there. There are many interesting memorials in the churchyard which is maintained and undisturbed. 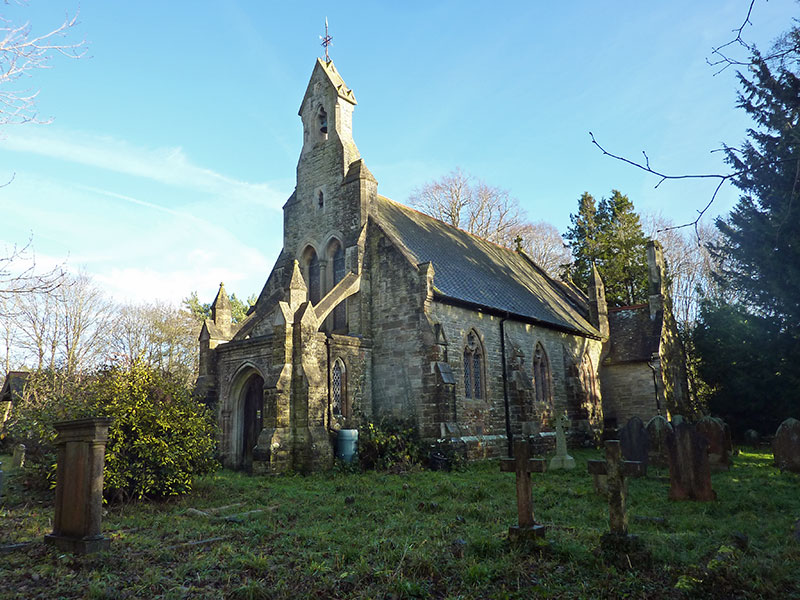 View from the back corner of the churchyard.

In the very far western edge of the Parish – near Wych Cross – is Ashdown Park once owned by Mr Thomas Charles Thompson who, in 1886, built a church in his grounds for his employees and neighbours. He called it St Richard de Wych. At that time his son-in-law was Vicar of the medieval St Mary’s at Beverley and the new church was based on it.

Thomas died in 1892 and the estate was inherited by his daughter, Mary and her husband, George Carnac Fisher and remained in the possession of that family till 1918 when they sold it to a Mr Anderson.

The following year a Teaching Order of Nuns, the Sisters of Notre Dame, turned up from Belgium and paid £15,000 for it all, with the exception of St Richard de Wych Church as it lay too far from the house. Instead they erected a temporary wood and asbestos chapel close to the house.

In 1926 the Nun’s permanent place of worship was consecrated. It adjoins the house and is of Gothic – Early English style harmonising with the house and is no less than 500 feet in length. They called it Notre Dame, Ashdown Park. 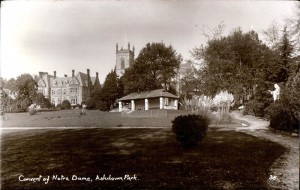 The upkeep of the convent began to be unviable and the Sisters left  in 1962 when their church was deconsecrated eventually becoming part of what is now Ashdown Park Hotel.

The land on which St Richard de Wych stood, together with the church itself, had passed through several hands. The church had not been used for worship since about 1935 and in the early 1970’s had been seriously vandalised. In 1973 it was declared to be unsafe and the then owner, Mr Simon Castle-Stewart, had it demolished. A sad end to what was described by an expert as one of the finest Victorian churches.

About 1862 the house at Colemans Hatch called The Ridge was bought by Lady Darling, widow of General Sir Ralph Darling. She lived there with her family including her brother, the Rev Frederick, who, aged only 40, was unable to run a parish for health reasons. (He died in 1909 aged about 87.) Lady Darling died in 1868.

Rev Darling had been taking Divine Service at the nearby Ridge School for some time before 1867 when the family built the Ridge Chapel adjoining the school which itself had been entirely supported by them. After his death the school and chapel continued unaffected.

Upon the consecration of Holy Trinity at Colemans Hatch in 1913 the Ridge Chapel closed. It and the school are now a private house.

The Wesleyan Chapel, known as the Old Chapel, located at the west end of the High Street, is the second chapel to have stood here. The first, in the early part of the 19th century, was made of wood and had a small cottage as its neighbour. This wooden Chapel had been moved all in one piece from further up the High Street by a team of oxen. We do not know when the present Chapel was last used as a place of worship but it remained empty and unoccupied for many years before it was bought and converted into a private house in 1967. The new owner researched the history of the Chapel and had the date 1857 placed prominently on the facade as the year of its construction. More recent research suggests the date was 1865.  (Drawn from Hartfield Village Historical Guide.) 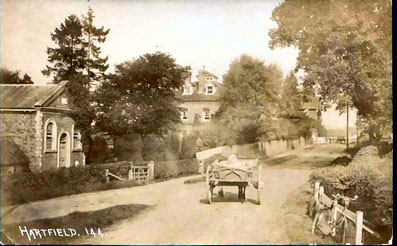 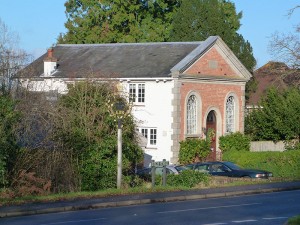 3 Comments on “The Churches”